George, Phoebe Darling and I hiked the Bald Cypress Trail in First Landing State Park during the quiet wee hours of a recent Saturday morning. 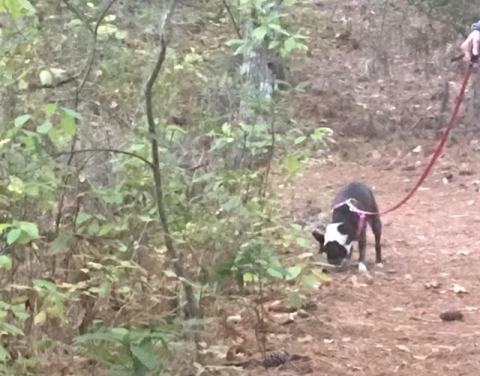 This trail lies inside an old maritime forest full of bald cypress swamps, lagoons, rare plants and wildlife. The Smithsonian Marine Station defines maritime forests as “narrow bands of forest that develop almost exclusively on stabilized back dunes of barrier islands, inland of primary dunes and scrub.” Maritime forests occur along the Atlantic coast of the United States.

The bald cypress (as the trail is also known) is a coniferous tree that sheds its leaves, hence its designation as “bald.”

Last winter was rather harsh for our area. We noticed a lot of downed trees.

The “knees,” which look like smaller cypress trees, protrude from areas where the trees are apt to stand in water and are actually part of the bald cypress’ root system.

Though the exact function is unknown, their purpose may be to collect air for the underwater roots.

Giving them a charming and somewhat spooky appearance, Spanish moss (Tillandsia usneoides) draped the trees throughout the trail. Just in time for Halloween!

While not parasitic, Spanish moss can lower a tree’s growth rate by reducing the amount of light to a tree’s own leaves.

We’ll be coming back to this state park. There is so much to see!